My name is Tyrell Meyers, I’m a 40 year old South African male, residing in the south of Joburg since 1984. I am a proud member as well as Ward Councillor in the City of Joburg Council, representing the DA Democratic Alliance. I will only make one promise and that is to “TRY” my very best to assist the community at municipal level. My ward is ward 23, which includes, Bassonia, Glenvista, Glenanda, Liefde en Vrede, Aspen Hills and Mulbarton. In the short period I've been ward councillor, we have achieved a lot to make our ward better. Roads are being resurfaced, potholes are being filled, lights are being put back on, we are winning the war on water leaks, and our ward is also looking cleaner. We are making progress and we are getting things done. That is the DA difference.

I joined the DA in 2006, after believing the ANC had strayed too far away from the ideals and principals held by former South African President Nelson Mandela. Its was the DA values and liberal policies that drew me to the party. The successes of fighting corruption and turning the City of Cape Town around, was a clear indication I made the right choice to get involved with the DA and stop complaining and whining about what is wrong and what I can do for my community. I served as Membership Chairperson of the DA Joburg Constituency from 2009, DA Joburg South Deputy Youth Leader in 2010, and Chairperson of the Joburg South Constituency in 2014. A title I still currently hold. Since my involvement, we have grown in the South of Joburg from a handful of members to  halls with DA branches in wards 23, 54, 55, 56, 57, 124 and 125. I was tasked with leading the DA campaign to capture wards 124 and 125 from the ANC in the 2016 LGE Local Government Elections, successfully with the DA winning ward 125 and reducing the ANCs hold in ward 124. Our growth in ward 124 continues with the gap between the ANC and DA being further reduced with the ANC holding onto ward 124 by over 100 votes in the 2017 By Elections. We continue to strive, serve and work hard for our communities towards retaining all six DA wards and claiming the last ANC ward in the 2021 LGE.

This is currently my second term as a councillor serving in the City of Johannesburg. In the 2011-2016 term of office, I served on the Transport, Economic Development and Rules Committee. It was here where we raised the concerns and voices of our residents about the poor service delivery the ANC government was providing to citizens. This was proven when voters punished the ANC on the 3rd August 2016 LGE, where the DA was able to form a multiparty coalition to govern the City of Johannesburg. In April 2017, I was elected unopposed in council to serve as Chairperson of the Transport Oversight Committee in the City. This is the second largest portfolio in the City of Joburg, as it includes Rea Vaya, JRA and Metrobus. Together with members of the other parties, we have put political difference aside for the greater good of our communities, conducting the most oversight visits across the City, and regularly hold the Executive to account on the delays, budget overruns, and non-compliance. One of my greatest successes is the re-opening of the M2 Motorway in November 2019. The motorway was closed at the end of February 2019, and we promised that this motorway would open on time, on budget, and so it did, with regular oversight visits and reporting to the committee on progress.

I am here to serve the residents in Ward 23. Irrespective of political affiliation, we should all be able to reside in a clean and prosperous ward. Projects opportunities should be open to all in the ward and not friends as has been the case. We need to work together in the community to make our ward a success and free from corruption and poverty. We all have a part to play in making this the jewel of the south. Look forward to working with you all!!! 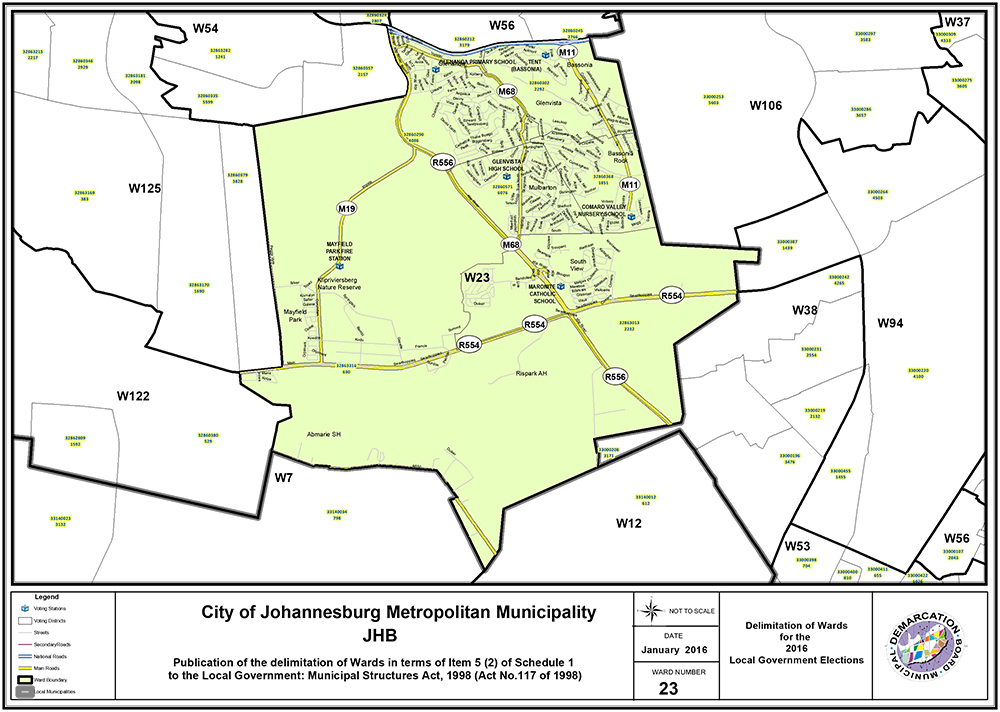